Richmond Dental and Medical Exhibits at AEEDC in Dubai

The 2nd largest dental event in the world, AEEDC promoted multiple symposia, lectures, workshops, and scientific activities on advances in pediatric dentistry, prevention and early care, aesthetic dentistry, and product innovations. In addition, the conference served as the setting for the 15th Global Scientific Dental Alliance Meeting (GSDA) with its 133 members from around the world.

Based on 2017 figures, event organizers expected nearly 50,000 visitors and participants from 130 countries around the world, as AEEDC provides a platform for manufacturers and service providers to serve customers of the rapidly expanding Middle Eastern market. More than 4,700 companies representing over 2,000 global brands were expected to participate in the 2018 AEEDC.

As a global leader in products for the dental profession, Richmond Dental and Medical was proud to participate in the largest dental event for the MENASA region of the Middle East, North Africa, and South Asia. At the event, Richmond met with potential distribution representatives from Egypt, Jordan, Pakistan, Iran, Iraq, Bahrain, Qatar, Turkey, and India, as well as overseas end users and current customers from Saudi Arabia, Oman, UAE, Kuwait, Japan, and Belgium. 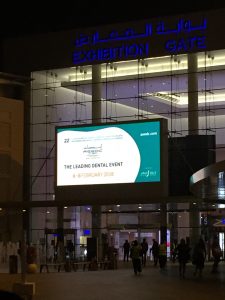 Richmond Dental and Medical’s participation in AEEDC is another validation of Richmond’s commitment to the global marketplace. “Ultimately, we go to the places where we can meet the people who can best help advance patient care in dentistry,” said Eskew. “Untreated tooth decay is a problem for more than 2.4 billion people worldwide, with some 190 million new cases forecasted each year, according to a new study in the Journal of Dental Research. It’s imperative that the profession continues to grow and have the best devices and products at the disposal of its dedicated professionals, in order to address this global epidemic.”

AEEDC also represented an opportunity for Richmond to gain a greater depth of knowledge with regard to certain markets:

Oman provides high-quality, relatively modern healthcare; however, it relies heavily on foreign medical expertise, as well as imported medicines & equipment. The oldest independent state in the Arab world, Oman is a high-income country, dependent on its dwindling oil resources, which generate 84% of government revenue. In the wake of the 2011 Arab Spring, the high social welfare benefits of certain Arab states, Oman included, have increased. Its universal healthcare system offers free primary care to Omanis and subsidized care for its foreign population. Over the last forty years, life expectancies have lengthened from 49.3 years to 76 years. Oman spends 2.6% of its GDP on healthcare, according to World Bank development indicators, and its population is expected to double by 2050.
Oman’s oral healthcare sector must improve its high incidence of oral diseases; however, the people of Oman are starting to realize the importance of oral health for overall health and wellness, in addition to training and education of dentists. 85 percent of six-year olds have an average of five teeth with cavities. The introduction of water fluoridation and education is beginning to help the public dental health situation in Oman, as has the 2006 establishment of the Oman Dental College, which admits 50-65 aspiring dental professionals annually.

According to the Times of Oman, there are about 500 private dental clinics in the Sultanate, which is almost double the dental clinics in the government health facilities. Many Omanis prefer to start their career in the public sector, rather than the private sector. Without private health insurance in Oman, dental treatment costs are not covered. 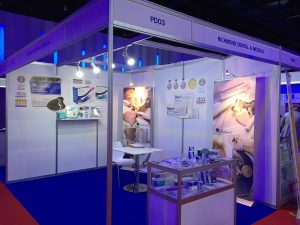 The Saudi government provides free dental healthcare services to all citizens and residents; however, the majority of the Saudi population chooses treatment in the private sector, which is supervised by the Ministry of Health. For the public sector, financed by the government, primary dental care is at the basic level of treatment (ex. simple composite or amalgam restoration and scaling). Procedures such as implants, dentures, and cosmetic dentistry are referred to higher government dental centers with long waiting lists.

It is becoming increasingly difficult for Saudis to obtain proper dental care because of the increasing population and incompatibility of the public healthcare system to the population’s actual needs. Only 11.5 – 15 percent of Saudis age 15 and older had a routine dental check-up last year. There are 16,887 licensed dentists in Saudi Arabia, while only 22 percent are native Saudis, and 61 percent are males. In 2000, there were three dental colleges; now, there are over twenty colleges of dentistry.

With regard to Saudi Arabian oral hygiene habits, 71.5 percent brush their teeth at least once a day; only 6.3 percent floss at the same frequency; while 30.3 percent use Miswak, a traditional, plant-based (Salvadora Persica) chewing stick, once a day.

AEEDC continues to offer a great place for Richmond Dental and Medical to develop relationships with friends in the distributor and dental communities across countries in the MENASA region.

< Back to library
Learn how Barnhardt Manufacturing Company, Inc. is communicating internally and externally, regarding the COVID-19 Pandemic. »
+